Dublin's most outstanding architectural feature is undoubtedly its five Georgian garden squares: St Stephen's Green, Merrion Sq and Fitzwilliam Sq on the south side of the city, and Mountjoy Sq and Parnell Sq on the north. Living in the south Dublin suburbs, I know St Stephen's Green and Merrion Sq fairly well, and have cycled past the smaller Fitzwilliam Sq a few times; but I'd never been to any of the north side squares, so on a break during a day's work in the city centre I decided to pay a visit to Mountjoy Sq.

Mountjoy Sq lies just north of O'Connell St. O'Connell St (Sackville St until 1924) was once Dublin's grandest thoroughfare, and indeed was considered one of the most impressive streets in Europe on its completion in the late 1780s. Here is Sackville St is in the 1840s, in a view looking north past the General Post Office (left) and Nelson's Pillar (blown up by Irish republican Liam Sutcliffe in 1966): 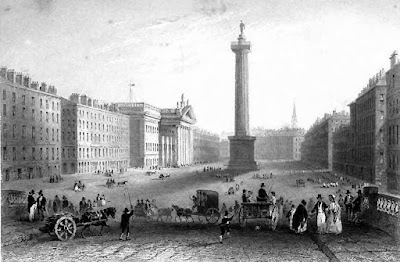 Sadly, these days O'Connell St is a very depressing place, full of (or at least, seemingly full of) fast food chains, casinos, and in the northern half of the street, derelict buildings. I feel especially sorry for the tourists who end up there having spent hundreds or even thousands of pounds to visit the city.

In any case, having sadly trudged to the top of O'Connell St, I made my way in short time to Mountjoy Sq. And very nice it is too: it sits on a hill looking down toward the river, and the buildings in the four ranges are remarkably consistent and apparently very well preserved. Here's a nice description of the square due to 18th c. contemporaries Warburton, Whitelaw and Walsh:

This square, which is now completely finished, is neat, simple and elegant, its situation elevated and healthy … the elevation of the houses, the breadth of the streets, so harmonize together, as to give pleasure to the eye of the spectator, and to add to the neatness, simplicity, and regularity every where visible, entitling this square to rank high among the finest in Europe.

And here's a picture I took of the south range (Mountjoy Sq South): 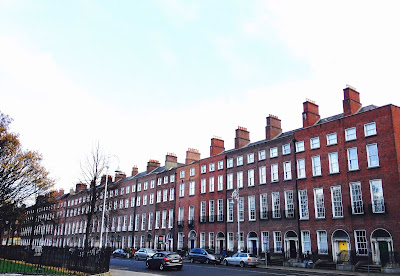 I had a nice surprise as well: having just taken this picture, I noticed that I was standing right next to this freshly-painted and well-preserved VR pillarbox: 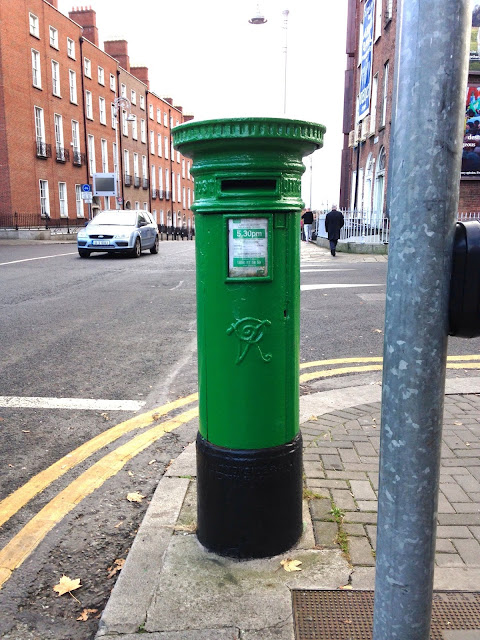 The street directly behind the box sloping toward the Liffey is Gardiner St, named after Luke Gardiner, 1st Viscount Mountjoy (1745-98), who planned and developed the square (which was built between 1790 and 1818). Here's an excellent portrait of the man himself, by Reynolds: 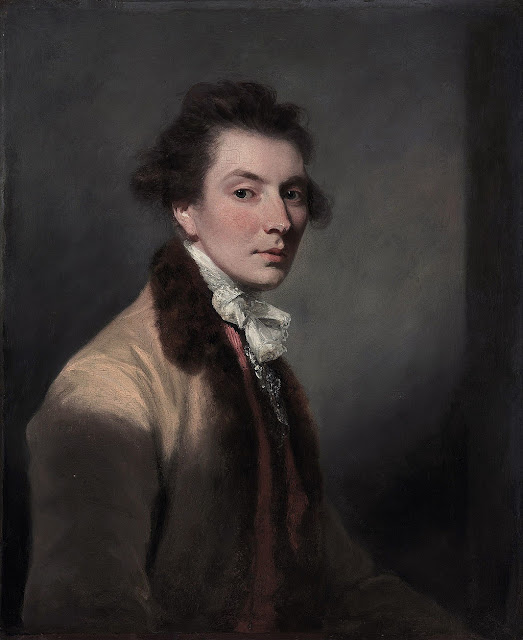 Mountjoy was killed fighting for the Crown against the United Irishmen at the Battle of New Ross during the Irish Rebellion of 1798. However his square persists, and has been an important part of Dublin - and Irish - life over the last two hundred years. Famous past residents of the square include James Joyce, Sean O'Casey, and W B Yeats. And - somewhat ironically given Mountjoy's demise - some of the planning for the 1916 Easter Rising took place in the square. I suspect he wouldn't have been best pleased.
Posted by Daniel Deasy at 09:14