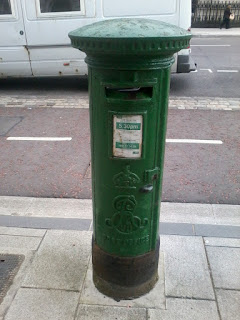 Here's a lovely E-VII-R situated on the corner of Parnell Place and South Mall in the heart of Cork City. The picture was taken at about 5pm (just before collection time) on a May afternoon in 2016, which would explain why the box is so full that you can see the most recent deposit peeping out through the aperture. That just goes to show that even though the box is over a century old (Edward VII was king between 1901 and 1910), it's used now as much as it ever was.

I'm specific about the date that this picture taken because it's interesting to see how the postbox has moved around over the last seven years: we can document it using Google's "streetview." If you're coming with me on this ridiculous journey, brace yourself for maximum nerdage...

Google's Streetview allows you to see historical images where they're available. In the top left of the page, you can see a little clock icon, and if you pull down the menu, you get a slider so that you can track the same scene over time. So here's what this junction looked like in June 2009, with the postbox sandwiched between electricity boxes and a dustbin: 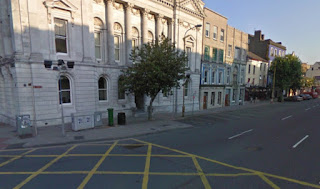 Now, a little over a year later, in October 2010, we see the postbox has stayed proudly in the same place, even though taggers have vandalised the electricity box:

Less than a year later -- in September 2011 -- the electricity box has been cleaned up, but WHOAH! The bin has moved closer to the corner... where are you going?

And now, finally, we see the current configuration as from September 2014. There's a new, additional, electricity box (presumably to control the more complex light sequence at the intersection) and the bin has vanished completely (along with the mature tree). The postbox has moved closer to the road, presumably to facilitate ease of mailing by users of the new cycle lane, but it's still present, after over 100 years of use. 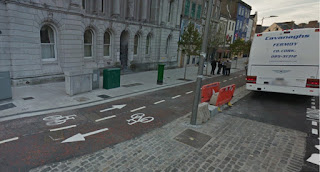 After so many incremental changes at this intersection, I'm glad the powers that be kept the old box (even though they had to move it), rather than replacing it with one of those hideous new "box-on-a-stick" contraptions.

Phew... time for a cup of tea and a lie-down in a darkened room.