Here is a VR-era postbox on Anglesea St. in Cork. It's one of the oldest in the city, so much so that it was flagged as worthy of viewing on the annual Cork Heritage Open Day (see here). 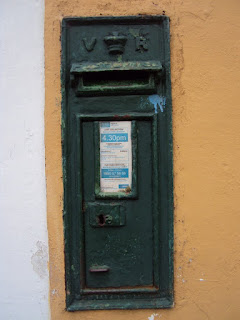 Here is an odd one from Evergreen St. at the Turner's Cross end. This is a difficult one to date. The aperture is a part of the door, so it can't be a VR (that feature was introduced later to avoid the possibility of mail getting stuck). There were some "anonymous" Type-B boxes made (i.e., with no cypher), but they didn't have a door handle, and the lock area was flush with the door. And I don't think it's Irish made, because they would have had either "SÉ" or the P⁊T emblem. So I suspect it's a GR or ER VII that has had the cypher ground off. Bit of an enigmatic one, this... 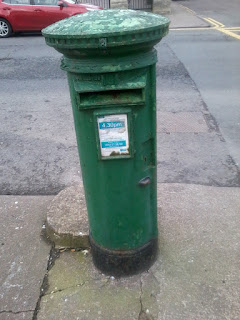