I spotted the pillar-box below while visiting my sister-in-law in Blackrock, Dublin, on the corner of Brookville Park and Springhill Avenue (googlemaps reference: https://goo.gl/maps/jAxrDVNsDSq). It was a cold November afternoon and the weak, wintery Irish sun was just setting, casting a lovely yellow glow on the rich green paint of the box. A dead fox lay on the side of the pavement close by, having clearly met his end under the wheels of a car.

This looks to me like a Royal Mail box with the Royal Cypher removed - it reads 'POST OFFICE' rather than 'PℸT' (1922-1984) or 'An Post' (1984- present), and in overall design closely resembles the 'GR' (1910-22) pillar-box on St Patrick's Hill in Cork (see this earlier post). This makes me think that the box has been moved from somewhere else, as it is surrounded by modern residential housing. Or perhaps its surroundings have simply changed dramatically over the past hundred-or-so years. In any case, it's tucked away in a residential side-street, but is in very good condition (missing Cypher notwithstanding) - an elegant suburban box. 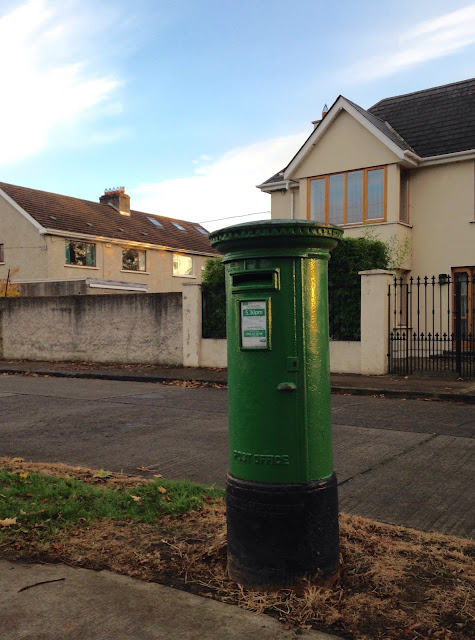